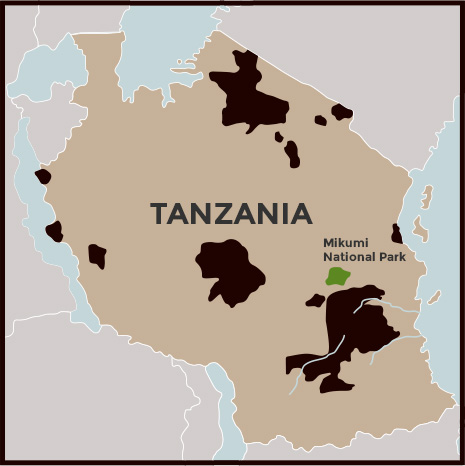 This park plays a very important role in the Tanzanian southern circuit. It consists of vast open grasslands interspersed with patches of acacia woodland and baobab. This park is one of the most accessible as it is just 3 to 4 hours away from Dar es Salaam. It is very close to the more famous Selous National Park and offers similar wildlife, vegetation and sightseeing opportunities.

This park has an abundant concentration of all life throughout the whole year, specially in the floodplain area along the mkata river. There are many large predators like lions, leopards and spotted hyenas. Many other mammals can be found and include the elephant, the buffalo, the zebra, the wildebeest, the impala, the warthog, the waterbuck, the reedbuck, the eland, the greater kudu, the sable and the giraffe.
Birdlife is also very strong in Mikumi with more than 400 recorded species. Some of the most prominent ones are: black-bellied bustard, bateleur eagle, ground hornbill, lilac-breasted roller, fish eagle, white-faced duck, long-tailed fiscal, yellow-throated long claw and the African spoonbill.

The best months would be the dry ones from May to October but the park is a great experience throughout the whole year.

Mikumi is a very convenient safari as it is economical and close to Dar es Salaam. For those who have a low budget or have very few days, a 3 days safari in Mikumi would be the best way to optimize the time in Tanzania and to reduce the costs. Besides not having to fly to Arusha, the safaris in the Southern circuit are cheaper than the ones of the Northern circuit.