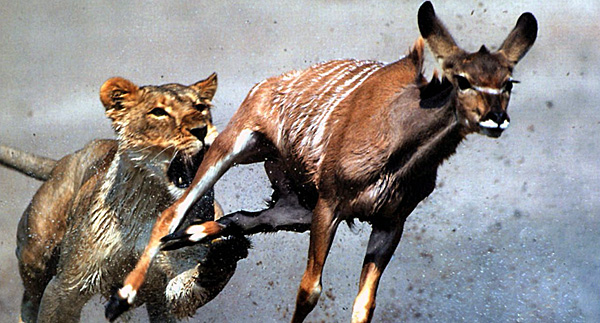 Welcome to the largest game reserve in Africa. This reserve has more than 45.000 square kilometers, making it larger than many European countries like Denmark, Estonia or the Netherlands.
This park offers one of Africa's remotest and wildest destinations with very few lodges.
The vegetation consists mostly of miombo woodland and is divided into two parts by the river Rufiji, which runs through the reserve from west to east.
Selous is one of Africa's primary safari destinations both because of the wildlife concentration but also because of some very interesting facts: First of all, it offers an opportunity to see very rare animals like the black rhino (extinct in most parks), in very healthy numbers. Another thing is that the lions in this park are different than the others (darker coats and less hirsute manes) and rely on an unusual opportunistic diurnal hunting strategy making Selous the best place in the world for witnessing a lion kill. Besides, the boat rides are fantastic to view the gigantic crocodiles, the huge hippos. It's also one of the few parks in Tanzania where walking safaris are possible and, indeed, very rewarding.

Wildlife is very abundant and the areas by the river and small lakes provide the best viewing opportunities during the dry season. With thousands of elephants, buffalos, giraffes, zebras and other antelopes, safaris are always full of excitement.
Large predators would be the lion, leopard, wild dog and the spotted hyena while other mammals would include the elephant, buffalo, giraffe, zebra, sable, roan, impala, bushbuck, waterbuck, wildebeest, greater kudu, puku, hartebeest and eland. The rivers are also crowded with hippos and crocodiles.
Of course, there is also an abundant birdlife including yellow-billed storks, white-crowned and spur-winged plovers, various small waders, pled and malachite kingfishers, African skimmers, fish eagles, palm-nut vultures, carmine and white-throated bee-eaters, trumpeter hornbills, purple-crested turacos and malgasy squacco herons.

This park is inaccessible during the rainy season so the best time to visit it would be between June and February.

Selous is definitely one of the greatest parks of Africa and the big decision will be to visit the Serengeti and other Northern circuit parks or Selous and other southern circuit parks. It's a very tough decision. The best would be if you have time to visit both of the parks. The advantages of Selous over the Serengeti is that it is wilder and less crowded while offering great wildlife opportunities. If you are doing a Southern itinerary, this park is an absolutely must.